Arajet, the dominican low cost airline, officially inaugurated its operations with direct flights between San Salvador and Santo Domingo in the Dominican Republic, after receiving all operating permits from Civil Aviation. El Salvador joins the more than 20 destinations that will receive the airline from Dominican lands in the coming months.

The airline officially began operations with its first flight to San Salvador in El Salvador, in a historic joint event led by Luis Abinader, President of the Dominican Republic, and Morena Valdez, minister of Tourism of El Salvador.

Initially, the salvadoran capital will be connected directly to Santo Domingo with two weekly frequencies, wednesdays and saturdays, departing from Aeropuerto Internacional de El Salvador at 18:30 to Aeropuerto Internacional Las Américas arriving at 23:55 hours. However, in his speech this saturday, the President of Arajet, Victor Pacheco, gave the exclusive news that as of november 2, it will be expanded to four frequencies, on tuesdays, wednesdays, fridays and saturdays. 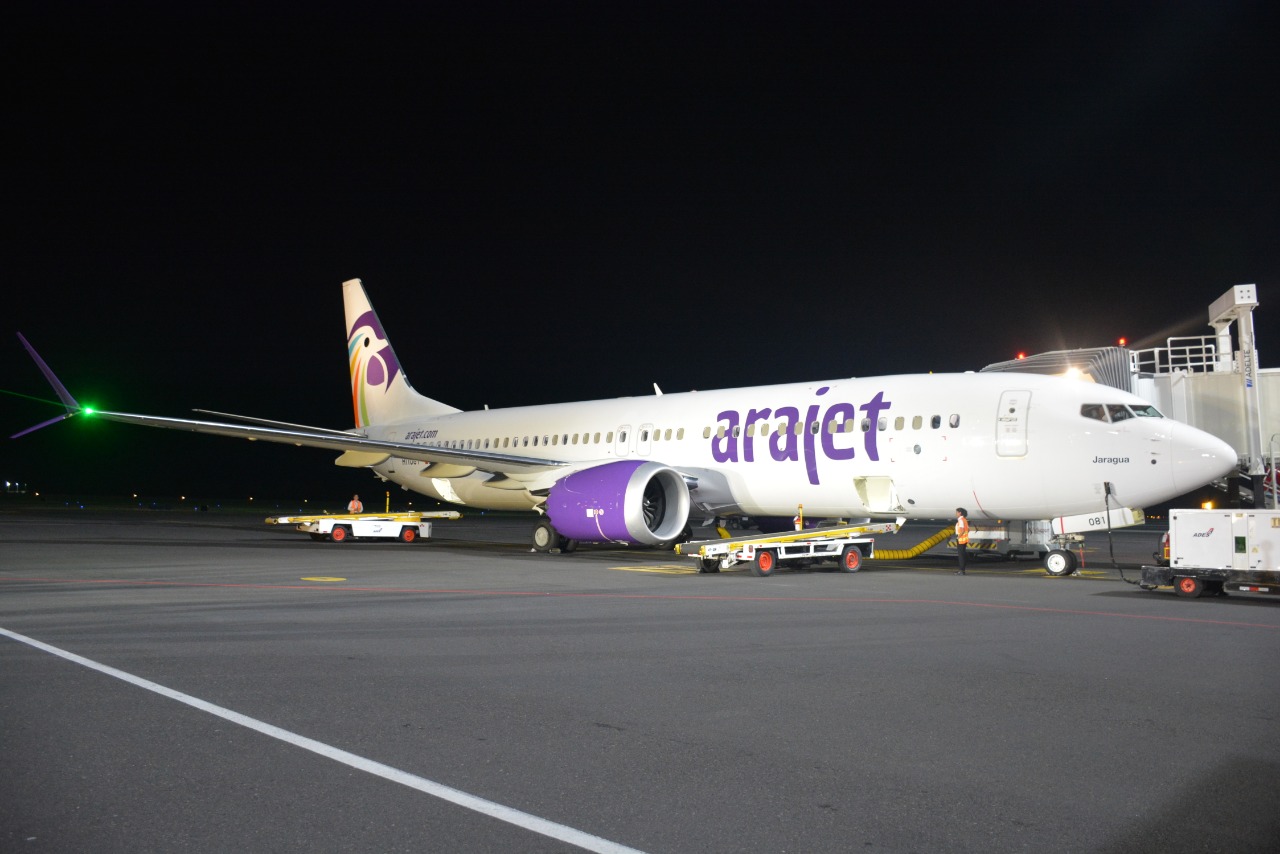 "This has been a joint effort of several government institutions that are committed to accompanying domestic and foreign companies so that they can start their operations in the country without complications. We seek to fulfill the vision of President Nayib Bukele to generate opportunities and jobs for the salvadoran population, to contribute to the development of El Salvador", said the Presidential Commissioner for Strategic Projects of El Salvador, Cristian Flores.

"With the arrival of Arajet to El Salvador we seek to strengthen commercial, touristic and cultural ties as well as to promote economic development opportunities between the two nations. We want more salvadorans to come and visit the land of merengue and more dominicans to discover every corner of El Salvador, traveling non-stop and with really low prices! Traveling with us will be an experience of warm, human and world-class service", said Víctor Pacheco Méndez, President of Arajet.

Morena Valdez, minister of Tourism of El Salvador, said: “From the Government of President Nayib Bukele air connectivity is key to boost tourism, making it easier for travelers to move between countries and discover the wide range of tourism that Surf City El Salvador offers, from the permanent consistency of its waves for surfing, its imposing volcanoes, towns and cities with great historical value".

Arajet enters the salvadoran market with more and better alternatives for non-stop travel to Santo Domingo, with shorter travel times, convenient itineraries, a warm and human service, and fares from 158 USD, round trip including taxes, which can be purchased at www.arajet.com

Santo Domingo, the capital of the Dominican Republic, has a population of more than 10 million inhabitants and is the leading destination in the region with the greatest tourist interest, given the diversity of activities that visitors can enjoy in this beautiful Caribbean city.

"With the arrival of Arajet to El Salvador we seek to energize and boost the commercial aviation industry, democratizing air travel and making it possible for more and more people to travel by air and enjoy the wonders of the Dominican Republic and, later on, connections with the main destinations in the Americas and the Caribbean", concluded Pacheco.

With a fleet of five brand new, state-of-the-art Boeing 737 MAX-8 aircraft, Arajet offers a comfortable and safe flight experience in a cabin configuration of 185 reclining seats for maximum comfort and sufficient personal space. In addition, its aircraft are eco-sustainable, reducing its impact on the planet by reducing fuel consumption by 14% compared to most single-aisle aircraft.

Starting in october, Arajet will add to its routes from now to Medellin and Bogota in Colombia and to Toronto and Montreal in Canada. In the following months, Arajet will also begin operations to Peru, thus completing its network of destinations in the countries of the first phase of operation.

Published in Business
Tagged under

More in this category: « Uber Eats invites salvadorans to celebrate independence and enjoy local flavor IFC and FEDECRÉDITO to promote gender equity in El Salvador »
back to top